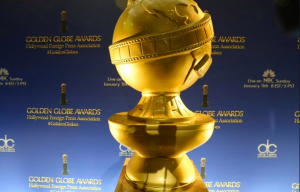 It’s always great to start the year off with the Golden Globes award. Sometimes seen as a precursor to the other major award shows, like the Academy Awards, the Golden Globes are fun and casual, with more colorful language, sharper critiques and more good humor than typically seen at other entertainment ceremonies.

Broadcast Sunday evening on NBC, the Golden Globes areHollywood’s first big glamor event of the year, where the stars show off the latest and most revealing couture, and the wins are often predictable but also sometimes surprising.

This year I am particularly proud of the fact that my home country, Hungary, won its first Golden Globe ever for a foreign language film with it’s entry “Son of Saul,” 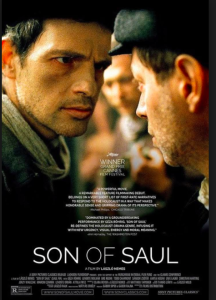 Laszlo Nemes‘ harrowing view of life inside the Auschwitz concentration camp. Although Hungary has contributed in many ways to the film industry, this is their first win for a major feature film, an honor long overdue and well deserved.

In the other major categories, two very different survival tales — Alejandro González Iñárritu’s “The Revenant” and Ridley Scott’s “The Martian” hauled in many of the major awards that could make them frontrunners in the upcoming Oscar broadcast. “The Revenant,” a bloody vengeance thriller set in the 1820s, won best film drama, as well as best director for Iñárritu and best actor forLeonardo DiCaprio. Iñárritu had a good run at the Academy Awards last year and won the best-picture award with is film “Birdman.” 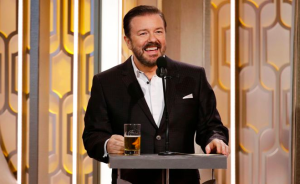 “Pain is temporary,” said Iñárritu, referring to the grueling shoot for “The Revenant” in the Canadian Rockies. “A film is forever.”

While “The Revenant” and “The Martian” took the top film awards, “Mr. Robot” and “Mozart in the Jungle” took home wins in the TV drama and TV comedy categories, respectively.

Winners in the key acting categories were Leonardo DiCaprio, Brie Larson, Taraji P. Henson and Matt Damon. DiCaprio, who appears to have gathered the momentum to be on track for his first Oscar, dedicated his award to “First Nations people represented in this film and all the indigenous peoples around the world. It is time that we recognize your history and that we protect your indigenous lands from corporate interests and people out there to exploit them,” he said upon receiving his award. I found his speech very powerful and extremely well spoken with a great deal of honesty.

Nominated for the same character that earned him his only other Golden Globe nod, sentimental favorite Sylvester Stallone took home the best supporting actor award for the “Rocky” sequel-reboot “Creed.” The crowd greeted him with a standing ovation. “I want to thank my imaginary friend Rocky Balboa for being the best friend I ever had,” Stallone said in a tip of his hat to the well-loved character. And of course for me it was a great deal of joy seeing him win after so many years as all my friends call me “Yo, Adrienne”

In an awards season where there are no clear favorites, two of the top-rated critical picks — the well-regarded journalism procedural “Spotlight, ” which is also the name of Atlantic Publicity’s own magazine, and Todd Haynes‘ lesbian romance “Carol” — failed to take any of the gold statuettes home with them. I still felt very connected this year to the Golden Globes. 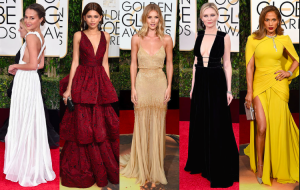 In his fourth go-round as the Golden Globe’s host, Ricky Gervais‘ irreverent act set the tone for the evening, often drawing loud laughter from the glamorous Beverly Hilton hotel audience, but also received some expected criticism, which he seems to enjoy. In a particularly awkward encounter, Gervais and Mel Gibson stood arm-in-arm after exchanging insults.

“I love seeing Ricky once every three years because it reminds me to get a colonoscopy,” said Gibson. To me Gervais somehow pulls it off each time and I think just his body language and accent create good humor. He is very entertaining. 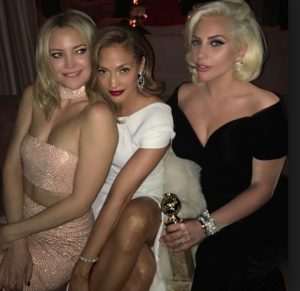 Jennifer Lawrence, who spent much of the night with her new friend and collaborator Amy Schumer, who was a Golden Globe nominee for “Trainwreck.” scored her third Golden Globe for a David O. Russell-directed film. After winning for “Silver Linings Playbook” and “American Hustle,” her third award came for his movie “Joy.” Lady Gaga, who has seven Grammys for her recorded performances, won her first major acting honor for her performance on the anthology series “American Horror Story.”

The Cecil B. DeMille lifetime achievement award, which often provides an emotional high in the award ceremony, failed to deliver any real drama, as honoree Denzel Washington fumbled with his speech, while his wife, Pauletta, prodded him about using his glasses. As his acceptance speech wound down, Washington finally acknowledged, “Yeah, I do need my glasses.” 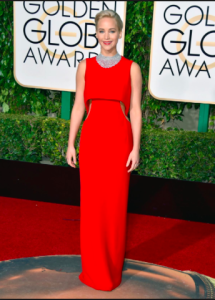 As I mentioned earlier, the best foreign language film award went to Hungary’s Laszlo Nemes’ “Son of Saul,” a treatise on the horrors of Auschwitz. The award for best-animated film went to Pixar’s highly regarded “Inside Out.”

Other acting winners on the TV side included Taraji P. Henson for “Empire,” Jon Hamm for the final season of “Mad Men” and Oscar Isaac for the HBO miniseries “Show Me a Hero.” 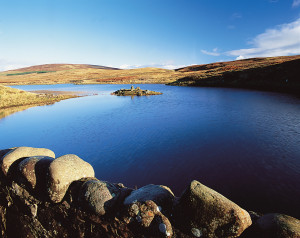 It did hit close to my heart that although “Game of Thrones” did not win it was nominated! Parts of the series were filmed on the very part of Ireland where Emerald Heritage of which I am the publicist/ambassador of is promoting the sales of the most beautiful landscapes on Earth and thus promoting a huge cause: re-foresting the land. That is truly an honorable cause, and John, Lyn and Roger, who work the project, are the most amazing people I have ever met.

The Golden Globe Awards never fails to entertain, and it’s a great way to kick off the New Year and the awards season. Now we have to wait to see if “The Revenant” and “The Martian” can hold their momentum as we heard into the ceremonies that matter the most in Hollywood – the Academy Awards to be broadcast on Sunday February 28th. 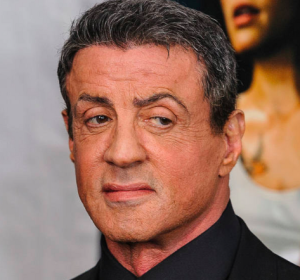 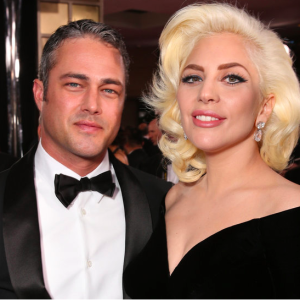 Best Performance by an Actor in a Motion Picture, Musical or Comedy 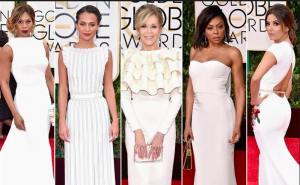 “Writing’s On The Wall,” for the film “Spectre” 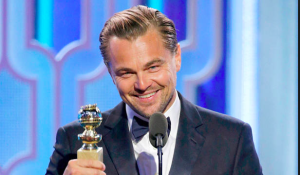 Best Performance by an Actress in a Television Series, Drama

Best Performance by an Actress in a Motion Picture, Musical or Comedy

Best Performance by an Actress in a Motion Picture, Drama 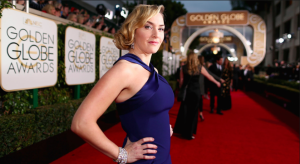 Best Performance by an Actor in a Motion Picture, Drama

Best Performance by an Actress in a Supporting Role in a Series, Limited Series or Motion Picture made for Television

Best Performance by an Actress in a Television Series, Musical or Comedy

“Mozart in the Jungle”

Best Television Limited Series or Motion Picture Made for Television 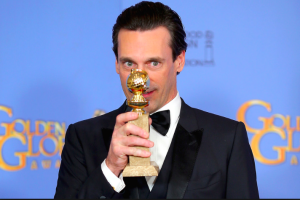 Oscar Isaac, “Show Me a Hero”

Best Performance by an Actor in a Supporting Role in a Series, Limited Series or Motion Picture made for Television

Best Performance by an Actor in a Television Series, Drama

Best Performance by an Actor in a Television Series, Musical or Comedy 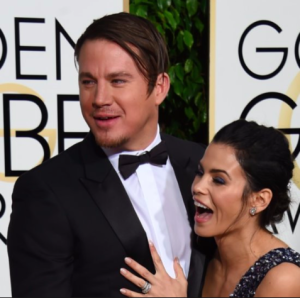 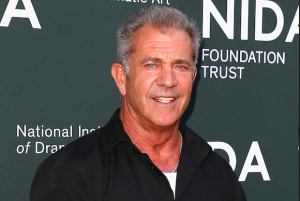 About the Author of This Article: Adrienne Papp is a recognized journalist, economist and feature writer, who has written for many publications including Savoir; The Westside Today Publications ; such as Beverly Hills 90210; Malibu Beach; Santa Monica Sun; The Beverly Hills Times; Brentwood News; Bel-Air View ; Celebrity Society ; Celeb Staff ; It Magazine; Chic Today; LA2DAY; West Side Today among many others. She is the President and CEO of Los Angeles / New York-based publicity company, Atlantic Publicity and publishing house, Atlantic Publisher. Adrienne writes about world trends, Quantum Physics, entertainment and interviews celebrities, world leaders, inventors, philanthropists and entrepreneurs. She also owns Atlantic United Films that produces and finances true stories made for theatrical release or the silver screen. Spotlight News Magazine is owned by Atlantic Publicity that just opened a new extension to it : PublicityLosAngeles. Adrienne Papp is a member of the International Press Academy.She is the Founder, CEO and President of Youthful & Ageless ™, Bringing Information to Billions™, An Honorable Cause™ www.LatestAgeless.com. www.OurMediaVenuesAndCompanies.com